Michaela stood by her brother as he was gunned down on a street corner. She flees to South Padre Island, Texas, knowing the killer is looking for her. In a failed robbery attempt, Betty's newly found half-brother kills her friend and coworker. She buries herself in depression and shame. Hap Lynch, a retired Kansas City cop, true to his own nature, wants to help.

A thousand miles away, Juan plays his own game of deception, motivated by blackmail, fear and love for his family. Even if he saves his wife, Lourdes, will he be able to save their marriage or will the truth destroy them?

Meanwhile, two ruthless businessmen, who have built a lucrative human smuggling trade, care nothing for the consequences of their actions.


Murder Can Be Golden (featured in Paragraphs: Mysteries of the Golden Booby)

The Golden Booby's influence on those who search for it brings out their greed, fear, need and violent behavior. Is the booby cursed?

Is there really a Golden Booby? You must help solve the mystery.

A Missouri State Senator is found dead on the Missouri State Penitentiary grounds. Was it her stand on cutting prison benefits, her bill to outlaw the flying of the Confederate flag or her bill to cut veterans' programs that made her a target? Did the senator's ghost really make herself known to two children?

Hap Lynch visits his old friend from the Kansas City Police Department and gets drawn into the murder investigation.

Murder is for the Birds

Feel the sea breeze, smell and taste the salty air, hear the tides roll in and see the natural beauty of the South Padre Island area as Hap Lynch and Luke the Detective Dog learn about the world of birding.

Experience the natural world through the Laguna Atascosa National Wildlife Refuge, the Laguna Madre Bay, the South Padre Island Birding Center and the many natural wonders of the Lower Rio Grande Valley in South Texas.

Help them solve the murder of a nature book editor who had one too many disgruntled clients. 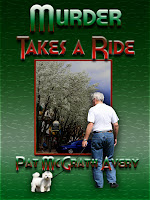 A dead body is discovered on a ride at a theme park near Branson, MO. Can Hap Lynch, a former police officer from Kansas City and an employee of the park, find the killer?

Luke is mighty proud to have his photo on the cover!